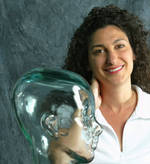 Allison Sekuler joined the faculty of the Department of Psychology at the University of Toronto in 1990. In 2001, Professor Sekuler moved to McMaster as Professor and Canada Research Chair in Cognitive Neuroscience. She currently serves as Associate Vice-President (Research) for McMaster University, and she is an adjunct member of York University’s Centre for Vision Research.

Professor Sekuler has been recognized as an Alexander von Humboldt research fellow, and as an Ontario Distinguished Researcher. In 2004, Professor Sekuler’s research garnered her the distinction of a "Leader of Tomorrow", by the Partnership Group for Science and Engineering (PAGSE), recognizing her advances in research showing how the human brain processes visual information and how that processing changes as a function of aging. And in 2005, she received the Hamilton Spectator Publisher's Award for Educators, in appreciation of her devotion and efforts toward increasing public science outreach.

Professor Sekuler has served on a grant selection panels at NIH, NSERC, and CIHR, chairing NSERC's Brain, Behaviour & Cognitive Science GSC in 2004-5, and curently serving on the joint CIHR/NSERC Collaborative Health Research Program panel. She has been on the editorial boards of Psychological Science and the Journal of Experimental Psychology: Human Perception and Performance, and she currently serves as an associate editor for Perception & Psychophysics and for the Journal of Vision, and she sits on the Exective Board of the Vision Sciences Society. Professor Sekuler's research in vision and cognitive neuroscience is funded by CIHR, NSERC, CFI, OIT, and the Canada Research Chairs program.