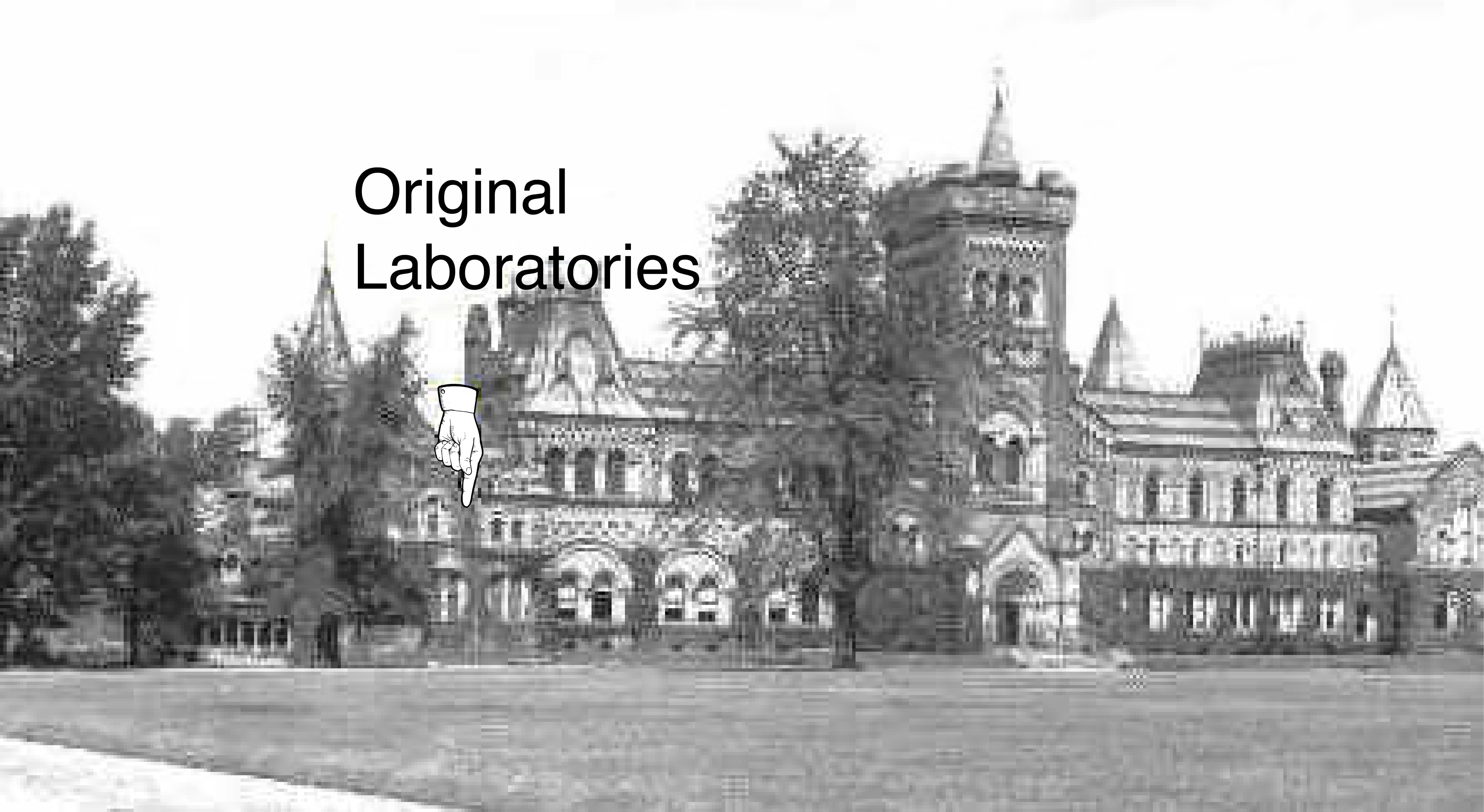 The instruments displayed in this exhibition represent the earliest research and teaching program in experimental psychology in Canada. They are witnesses to an extraordinary period in the history of philosophy and psychology, when scientists started measuring, describing and investigating the contents of our sensations and thoughts. In particular, these instruments derive from the pioneering psychological studies at the University of Toronto carried out between 1891 and 1926. In 1891 James Mark Baldwin (1861-1934) founded the psychology laboratory at the University of Toronto, the first of its kind in the British Commonwealth. This laboratory included the latest instruments and books from Europe. In 1897, August Kirschmann (1860-1932), who had come from Wilhelm Wundt’s laboratory in Germany, expanded the laboratory (including new rooms and instruments) and established a thriving research program with a publication series for faculty and students. Edward Alexander Bott (1887-1974), a gifted experimentalist who had trained at Toronto, took over the laboratory in 1912. He continued the traditions begun by Baldwin and Kirschmann establishing psychology as an independent department at the university in 1926.

Brass instruments, which make up a majority of the Baldwin-Kirschmann-Bott collection, played a major role in defining what was then called the "New Psychology." They showed, writes historian Michael Sokal, "just what was new about the "New Psychology." In the late nineteenth century, experimental psychologists were intent on modeling their emerging discipline on the natural sciences; psychological instruments and laboratory practice served to legitimize this movement, thereby separating psychology from its traditional parent, philosophy.

Many philosophers vehemently opposed the new experimental psychology. They adhered to Emmanuel Kant’s view that mental events could never be captured or measured by experiment. Others, who favoured variants of a new psychology, saw the emerging experimental program as too rigid and limiting. William James, the grandfather of American psychology, was part enthusiast and part critic of the new "microscopic psychology" coming from laboratories in Germany. At times he protested against the reductionistic search for the elements of mental life and the use of statistics to describe the elements of the mind. "The Mind must submit to a regular siege," James wrote in his famous work Principles of Psychology (1890). "There is little of the grand style about these new prism, pendulum, and chronograph-philosophers. They mean business, not chivalry."

The "new psychology" faced even tougher opposition in Toronto. The appointment of James Mark Baldwin in 1889 caused a considerable stir in this conservative, colonial town. (Hoff, 1980). The Toronto establishment (philosophers, clergymen and the press) remained faithful to British idealist philosophy, and did not take to a "materialist" who advocated an elemental view of mental life. In addition, a group of Torontonians called the "Canada Firsters" fought hard to block any foreigners from joining the faculty at the University of Toronto. Baldwin won the appointment with the help of President Sir Daniel Wilson who counted among the longest serving faculty members at the University. Wilson saw the value of hiring a young star in an emerging field, and to the chagrin of his opponents, Baldwin became a very popular teacher on campus putting experimental psychology on the road to acceptance and success in Toronto.

In the past 30 years historians of science have begun to recognize the value of scientific instruments. By studying instruments, historians are able to better understand the actual practice of science, as well as the theoretical concerns. For a more complete history of psychology at the University of Toronto, a focus on the psychological instruments provides insight into the technical origins of experimental psychology and what the pioneers of this movement experienced in their routine work.
In the current exhibition we have described each instrument (with key parts, markings and dimensions) and their general function. More specifically, we have tried to identify how teachers, researchers and students used the instruments at Toronto. We did this by exploring the standard psychological literature and some local sources (see bibliography). Most of our instruments, for example, were used for teaching and demonstration, such as the

memory apparatus. Others were used for more refined quantitative research, such as the

Mosso Ergograph and the Einthoven string galvanometer. At times, the artifacts themselves serve as the best source of information on past use (see, for example, the local adaptation to

We have also focussed on the unusual origins of some of the instruments: Wilhelm Wundt adopted the Hipp chronoscope from astronomy to quantify nervous reaction times; experimental psychologists took the kymograph from physiology to record bodily responses; researchers adopted the spectroscope from physics to investigate visual perception; experimenters borrowed resonators, organ pipes and tuning forks from music, physics, and physiology to study auditory perception.

Above all, the instruments in this collection allow us to connect to an important chapter in the history of psychology. As Baldwin boasted, the University of Toronto had the first psychological laboratory on British soil. Many of the events that took place here (practical, theoretical and social) provide a more detailed picture of the emergence of the "new psychology" in Europe and North America.

This project has been generously supported by the Psychology Department at the University of Toronto. David Pantalony, the researcher and curator of this exhibit (© 1997), is a Ph.D student at the Institute for the History and Philosophy of Science and Technology.

Douglas Creelman (1933-2014) first proposed the idea of placing the collection of psychological instruments on the Web. The Psychology Department at the University of Toronto owes a great debt to Professor Creelman for preserving, researching and promoting their historic treasures. Prof. Creelman's idea for an on-line exhibition has also led to a larger database of scientific instruments at the Univeristy of Toronto, (UTSIC).

Special thanks are owed to a handful of people who contributed unique skills and knowledge to this project. Eugenia Distefano for the excellent web design of this exhibition; Ed Knapp and Louisa Yick for their photography; Geoff Bunn for valuable research ideas; Rolf Kroger for a German translation; Hollis Joe of the interlibrary loans department for helping to track down several books and catalogues; Douglas Richardson of the University College Archives for a wonderful tour of the old laboratories; and, Harold Averill of the University of Toronto Archives for providing many fascinating historical leads.

Coon, Deborah J. (1993). Standardizing the Subject: Experimental Psychologists, Introspection, and the Quest for a Technoscientific Ideal, Technology and Culture, October: 757-783.

Davis, A. B., & Dreyfuss, Mark S. (1986). The finest instruments ever made. Arlington MA: Medical History Publishing Associates I.

Krohn, W. O. (1893). The laboratory of the Psychological Institute at the University of Göttingen. American Journal of Psychology, 5: 282-284.

McPherson, M. W., Popplestone, J. A., & Whitmore, J. (1967). An Exhibit in Honor of the 75th Anniversary of the American Psychological Association. Akron, Ohio: The Archives of the History of American Psychology.

Miller, D. C. (1935). An Anecdotal History of the Science of Sound: To the Beginning of the 20th Centruy. New York: MacMillan.

Popplestone, John A. and McPherson, Marion White (1971). Prolegomenon to the Study of Apparatus in Early Psychological Laboratories Circa 1875-1915," American Psychologist 26: 656-657.

Sokal, Michael M.; Davis, Audrey B., and Merzbach, Uta (1976). Laboratory Instruments in the History of Psychology, Journal of the History of the Behavioral Sciences, 12: 59-64.

Sokal, Michael M., Davis, Audrey B., and Merzbach, Uta (1975). A National Inventory of Historic Psychological Apparatus, Journal of the History of the Behavioral Sciences, 11: 284-286.

Museum of the History of Psychological Instrumentation, Montclair State University The Eduard Zimmerman Catalog of 1903

A. H. Abbott's Description of Early Experimental Psychology and the Laboratory in Toronto, at Classics in Psychology